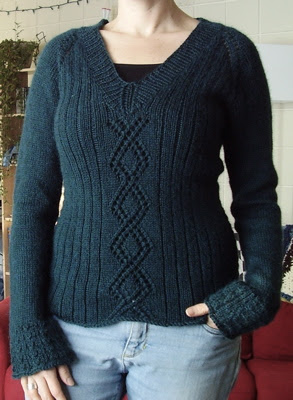 Pattern: Mystique by Zia at Per Amore. I first saw this sweater posted on Craftster and have been wanting to make it for a while now.
Yarn Sierra Aran (80% Wool/20% Alpaca; 83m/91 yards) from Elann.com in "Jasper", color 795 (the color I used seems to be gone from the page). I used just a smidgen over 10 balls, so approximately 910-920 yards for the sweater. The color of this yarn is almost impossible to pin down. It is green. But sort of teal. And sometimes it's got more of a bluish tinge. And sometimes it's really really dark green. And sometimes it's not that dark at all. I've given up trying to photograph the color accurately.
Modifications I used a heavier weight yarn than called for and went up a needle size to US7/4.5mm. I used a different lace panel for the center of the body, but for the life of me I don't remember why I did that. I like the original on the pattern, so I'm not sure why I changed it (I like what I ended up with, it's just different than the pattern). I also changed the lace on the cuffs to be a repeat of the lace panel on the sides. I didn't know how I would like having 3 distinct lace patterns on the one sweater. I do like it on the original, but decided to use the same for continuity.

I have a feeling this sweater will become a staple of my wardrobe. If it gets cold again. Ever. (Um, maybe I should take that back. I like the constant chinook weather. Honest. It's just a little strange to have all this wool and sweaters and hardly ever NEED them.)

I have a couple of other things going, but I've been good and only have 2 projects (and a sock)(socks don't count as a project)(right?) on the go right now. My camera batteries died so I don't have in progress pics for you but I do have this: 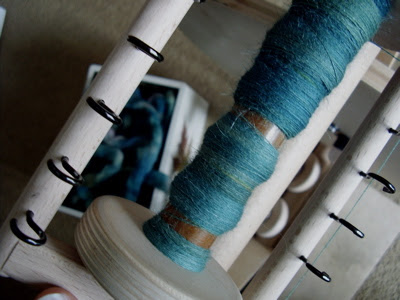 Ahh... Spinning. This is 190g of 85% Wool/15% Mohair dyed by Erynn at Twist of Fate Yarns in the "Grass is Greener" colorway. It is beautiful and so lovely to spin. The colors flow from a grassy green through a teal and a blue. Totally my colors.

Also pictured there is one of the boxes my friend Julie gave me for my birthday. (if my camera batteries weren't dead etc...) She painted them and decoupaged (sp?) beautiful leaves on them. There is a set of 3 in different sizes. Oddly enough (ha) one of them is a perfect size for "in progress" projects; one is perfect to hold the roving while I spin (so I don't have to keep picking up the pile of fiber to move it around in my cramped living room) and the smallest is ideal for odds and ends for knitting and spinning. So thoughtful! (I'll show you when I have batteries)
Posted by Lori at 3:39 PM 12 comments: 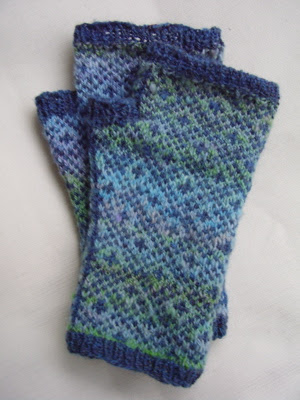 Completed just in time for too-cold Thursday (-25ish Celsius), my version of Eunny Jang's Endpaper Mitts. This picture shows the colors much more accurately. I love how they turned out! This is my first completed project (for me) from my handspun, and I am a little bit big-headed proud of them.

Details:
I used a regular (long-tailed) cast-on for both of them. I only did 2 repeats of the chart before beginning the thumb increases.
I learned to do a tubular/kitchener cast-off: 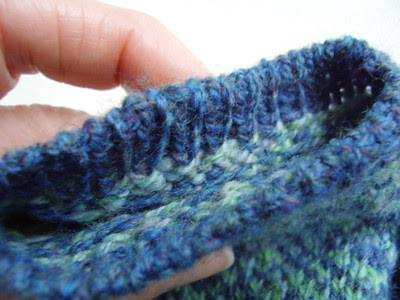 D'oh moment:
I decided that I didn't need the tubular bind off so I didn't do it for the second one. (I was lazy in a hurry) You can see the difference here: 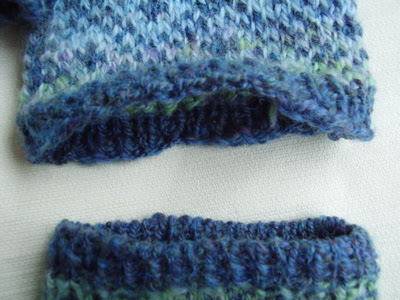 (tubular/kitchener bind off is on the bottom)

I plan to go back and re-do the bind off (correctly) for the second one. Who am I to assume I know better than Eunny? Seriously. (haha)

I had resolved to knit from stash this year, and (you might want to sit down for this one) to complete one of the projects I have on the go before I'm allowing myself to start a new one! So, to that end, I'll show you some in-progress shots tomorrow. I only have 2 projects on the needles right now. I couldn't believe that one myself. But, it's true. There's nothing I've forgotten about. (I do have plans for the next 2 or 3 though.)(that doesn't count as starting)

My cold is still hanging on, so it's a really good thing knitting is such a stationary pursuit. (most of the time). I'm off to lie down and finish a sock. Or start a mitten.

Today is one of those days when I feel slightly smug, sitting in my apartment surrounded by the piles and piles and piles warm wool of my stash. If only I could knit faster.

Currently this is the situation: 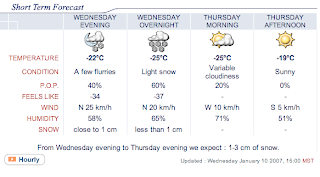 (Note: we in Calgary got off easy as far as this storm is concerned, we just had wind and will have frigid temps for a day or so. Nothing like the piles of snow and white-out conditions in Central/Northern Alberta and Saskatchewan. So glad for that.)

I didn't get my new sweater done in time but I will be able to wear these in the office tomorrow: 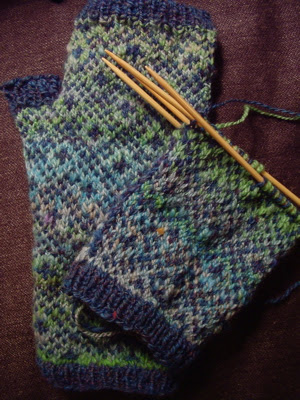 Pattern: the ubiquitous Endpaper Mitts by the talented Eunny Jang.
Yarn: My OWN!! (eee) I'm using 2 of my first efforts from my wheel. I'm really happy with how they are turning out. The yarn is squooshy and soft and so far fairly even. I'm getting approximate gauge, but I'm not so concerned about that now.

So, now I must go and knit. And turn up my heat a little bit. And dig out some long underwear for tomorrow. Worse comes to worst? I'll stuff my winter jacket full of skeins of wool to keep warm.
Posted by Lori at 5:27 PM 4 comments:

Yes, you read that correctly. I am finally done* Christmas 2006. Whew.

The last few projects (i.e. those I have not yet posted pics of) are as follows:

For my friend Julie. She hasn't received it yet so, you know, don't tell her. shh. 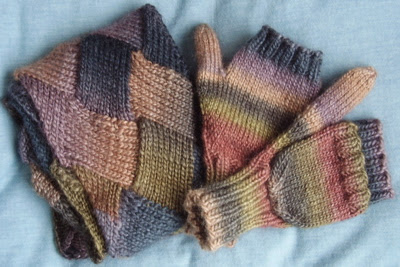 Pattern(s): Knitty's Danica (entrelac scarf) and a combination of several patterns for the flip top mittens
Yarn: Patons SWS in "Natural Earth" Somehow I managed to get the striping to match up (almost) perfectly on the mittens. Love it when that happens.
Entrelac in this particular colorway of SWS is so nice! I may just do one for myself. Eventually. Not for some time though. Entrelac was a lot simpler than it looks, but I don't think it will become a staple of my knitting repertoire. Also, I'm pretty much done with knitting flip top mittens (this was pair 4). At least until I decide to make myself a pair. Eventually.

For my friend Cobi. She also has not yet received this, so, again, don't tell. 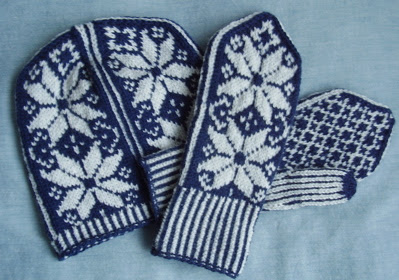 Pattern: I got the chart and basic directions for the mittens from a friend. The directions were less "pattern" and more "here's the steps that you will need to do in order to get mittens". I kind of liked that (although it sort of freaked me out a bit when I first contemplated it) because I think I learned more about the process of knitting them and will be able to apply that to different gauges this way. The hat is just 4 repeats of the mitten chart. Whee.
Yarn: Sirdar Country Style DK (45% Acrylic, 40% Nylon, 15% Wool). I LOVE this yarn! It doesn't feel very "acrylic" but not scratchy either. It has enough "grab" for doing fair isle type work and the yardage was incredible: 348 yds/318m to 100g. I have enough left over to make at least a pair of fingerless mittens.
I really think there is something that happens when knitting this two-color stranded knitting that makes time slow down and your hands speed up. It seemed like I knit the mittens faster than any other mittens I've ever knit. How is that possible?

For my friend Cobi's son (one of the twins). Again, he hasn't received it yet.

(It seems wierd that I haven't seen my best friends to give them their gifts, doesn't it? Cobi and her family are moving (big sob.) and Julie was away. I'm not THAT much of a hermit.)(haha) 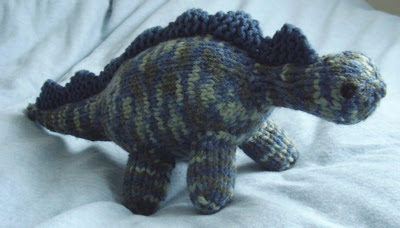 Pattern: Free downloadable pdf (link to pdf on this page) at Xtreme Knitting.
Yarn: Red Heart Cozy Wool from stash.
I made this guy with bulky/chunky yarn and US8/5mm rather than worsted and US6/4mm as called for in the pattern. He turned out quite a bit bigger than the one I had made previously, which is what I wanted. I kind of like him in the variegated yarn. I think a dinosaur should have mottled looking skin. For camoflage. You know.

And, finally, a birthday gift for Cobi. I saw her on her birthday but it wasn't done yet. D'oh. 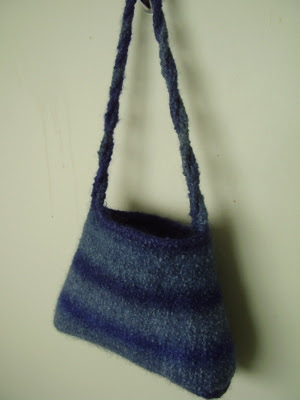 Pattern: Magknits' Sophie
Yarn: Patons SWS in "Natural Denim"
This turned out a lot smaller than I had hoped. In my defense, I was knitting it as my cold/flu was starting up and wasn't thinking so clearly. It's useable and doesn't completely look like a little kid's purse, but it's not what I was aiming for. oops.

So, that's it. From now on, I knit for ME. I'm working on a top-down sweater for myself (I'll show you a progress pic when it looks like something) and have plans for a pair of fingerless mittens for work using my handspun. (whee). I also plan to make myself a pair of Norwegian mittens from the pair that my "aunt" Evelyn lent me.

I'm also going to challenge myself to knit from stash this year. I've seen this talked about a few places and it falls in line with what I had already been thinking/planning. I have MORE than enough yarn currently on my shelves to knit all year. We'll see how long this lasts. (I like the exception that is made for spinning fiber!)

*I'm "done" but not completely done. I have 1 leg warmer and a teeny tiny tutu to make for my friend's little girl. The main gift was the tutu I showed a while ago, but after it was done I decided to do leg warmers too. Then, because Mr. Bunny needs whatever she gets, I'll work on a tutu for him from the scraps. THEN i'll be DONE done.
Posted by Lori at 3:05 PM 3 comments:

The Hermit Has Left The Building!

Yes, you heard that right. (or, I suppose "read that right"). I left my house this evening. To go out. To meet with people I don't know. Out of my house. Yes I did.

Heather, from Lectio suggested that I come out to Knit Club this evening and (drum roll please) I WENT!! And met people! And felt really at home and comfortable. I'm really glad I went. I met people (whose names I may or may not remember accurately): Anne, Erin (?) and, um, I wanna say Christine? (I'm so sorry. I really really wanted to remember your names.)

When I walked in, wearing I was immediately recognized because I was wearing my Clapotis and was welcomed to the table. Knitters are so nice in person! Really!

Heather is lovely and fun, and the other girls (whose names I have butchered here, sorry again) were fun and interesting.

And, I may have bought some beautiful fiber from Erin (?) (Okay, I just went to her website and realized that I had the sound of her name right but not the spelling. It's Erynn and you can see the beautiful yarns and fibre she has at her site, Twist of Fate.) (I totally bought some fibre from her. It's beautiful. I'll show you when I have some light.)

I think I'll go back. This venturing-outside-my-home thing was kind of fun. Who knew?
Posted by Lori at 9:37 PM 1 comment: