What do you knit for the Girliest Girly-Girl? 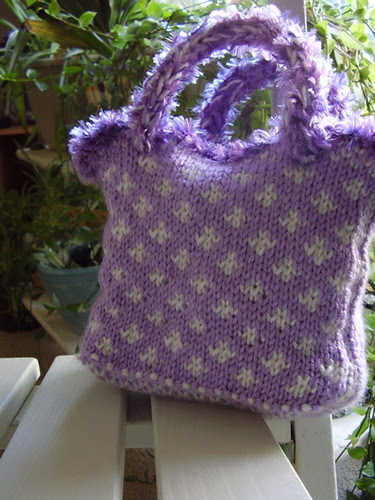 Very important to make that distinction.

Now, if you'll excuse me. There is a pile of blue stuff that needs to be knit.
Posted by Lori at 7:09 PM 6 comments: 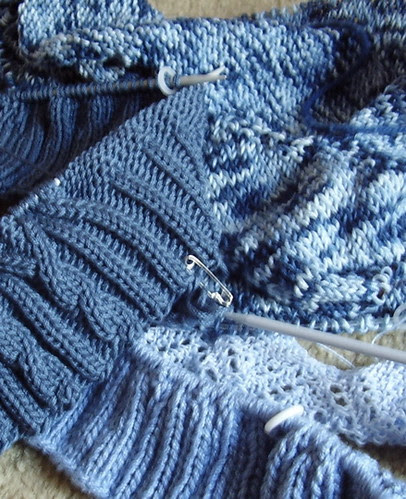 clockwise, starting at top right: 3/4 completed Mesilla (in Filatura di Crosa Mille Fili Fine from stash); lace border for potential stole knit in crochet cotton (pattern evolving as I go); 2 1/2 inches of body of the Ribby Cardi in TLC CottonPlus; 3 inches of a cabled tank from last summer's Vogue Knitting - in the yarn called for in the pattern! A first for me! (Butterfly Super 10)

Above there are the current UFOs*. Notice anything?**

The UFOs are on hold at the moment because I picked this up at Michaels yesterday: 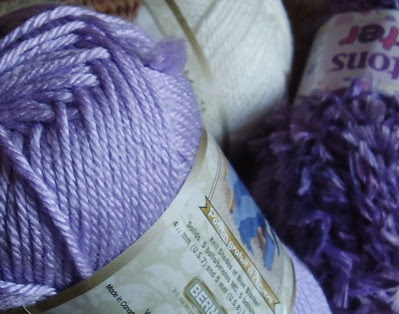 Now, surely you must realize this is NOT FOR ME. I was looking around in the "yarn" (i.e. fug novelty yarn) aisle hoping I wouldn't run into anyone who knows me, who may realize that I'm a knitter who DOES. NOT. KNIT. NOVELTY. YARNS. My niece's birthday was last week. It took me a while to figure out what to give/make her, and when I did, it required (ugh) furry yarn. AS. AN. ACCENT. ONLY!!! 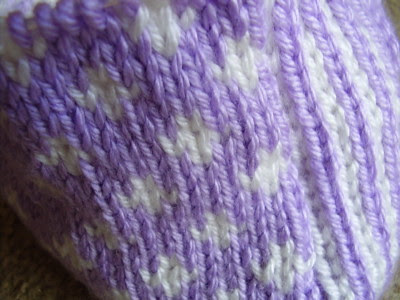 What do you make for the girliest of girly girls who already has all the Barbies/Brats/Polly Pockets the house could possibly hold? A girly-girl purse, of course. In light purple (the ball band calls it "Star Dust". I'm not kidding) and creme polka dots with a (ugh) furry band around the top. (Basically, I'm making it up as I go)

Please don't take my yarn and needles away from me. I PROMISE this is the last time I will (voluntarily) use novelty yarn.

I just realized I missed my Blogiversary (??) on May 5. I've been boring people to tears doing this for a year now! Thanks for sticking around! I've "met" some really nice people (you!) in the past year through doing this and I have really enjoyed sharing what I'm doing and what you're doing through this medium. Thanks!

I'll be back (soon) with more pics. Of a finished furry purse for a girly-girl! Yippee!! (I'm trying to psych myself up.)(If I didn't know that this is so her I wouldn't be able to bring myself to go ahead with it)

*These are, of course, not ALL of the UFOs. These are the ones I've been actively working on in the past week. There are far more UFOs. But you know that already.

**I realize I'm stuck in a color rut here. I realize I should try other colors. (of course my mind immediately thinks of the beige lace cardigan and the wheat colored tank top. I know those aren't "colors") The thing is, I LIKE blue, so I'm okay with the rut. It's comfortable here. ha
Posted by Lori at 7:39 PM 3 comments:

In order to retain our PG rating, today's post has been screened by censors

I love the look of the Coton-Silk when it's knit up. It's a bit of a pain to work with though, it has no give, it's a bit nubby so it's not smooth to knit with. And then there was this: 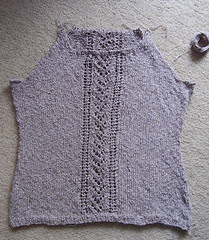 What's that? You don't see the problem?

This [bleep]ing tank top doesn't have the shoulder straps on it yet. This:

is all that is left of the [bleep] Coton-Silk. [bleep]. [bleep bleep bleep].

I have a plan for the shoulder straps. They are bands of ribbing, knit separately and attached to the body. I'll let you know if it works. If I ever decide to pick up this [bleep] tank top again.

Oh, wait, I'm not done telling you about this [bleep] tank top:
I swatched for this. Yes, I did. I figured that I would need to make the size medium which should have given me a fitted, but not tight tank top. Similar in dimensions to the Soleil I knit. 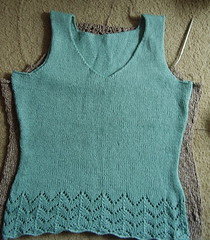 [bleep]. I could have knit at least a size smaller. Then, I would have yarn for the straps. [bleep]. I still haven't completely ruled out frogging the whole [bleep] thing. The only thing that stopped me from just ripping away, yesterday when I realized how wide this is, was the thought of having to re-knit it (as I mentioned: not super-fun to knit with). [bleep]

As it is right now, it's not unwearably large (is unwearably a word? it is now.), but i think it will have a tendency to balloon a bit. [bleep]. 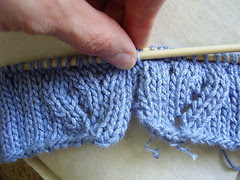 I started the body of the Ribby Cardi. The more I looked at this sad bit of lace insertion, the less I liked it. It has since been frogged. I think I will knit it plain. I liked the idea of splitting the lace panel but the more I think about it, the more I like the idea of plain body with the lace panel on the sleeve. I'm not as prone to the censors on this knitting, as it's much easier to knit and, as I mentioned before, I could probably knit a Ribby Cardi in my sleep.

There was another frogging incident today, but, it was ugly and we won't offend with pictures (the ribbed tank top didn't make it. It's on its way to a better place)

I'll end with some happy news:

The first front of the lace cardigan is done. It went pretty quickly, once the chart was in my brain, so I should be knitting the rest of the pieces before my brain forgets. (I'm not at the moment, but I should be).

I should go, before I have to wash my mouth out with soap.
(I still can't use Ivory soap because the smell of it reminds me of having my mouth washed out with soap. That sounds horrible, but it was really just a little touch to the tongue with the edge of the bar of soap. It was effective, but it left me with a hatred for Ivory soap.)
Posted by Lori at 7:12 PM 4 comments:

Nature!
While watching the Oilers game last night, I noticed something zipping past my apartment. At one point in the game, there was a long pause as the officials "went upstairs" to check the replays on a goal/no goal situation. I looked out the window and saw: 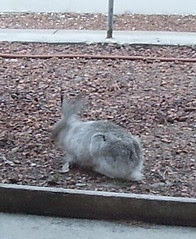 These rabbits are all over the place in Calgary. I don't know if they come in from the fields and decide they like it in town or what.

As I was watching the rabbit another one came along: 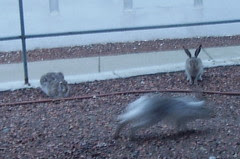 This one sat and glared at me for a long time: 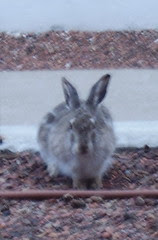 He seemed really angry. I don't know if he was cheering for Detroit and was angry about the goal or what his deal was.

Then I saw another one! 4! Usually there's just one hopping around, looking for food, or whatever. These rabbits were organized. They were like street rabbits. A gang, if you will. 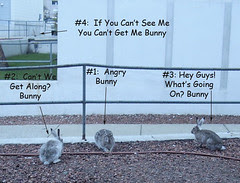 Decay!
This morning, while calmly eating my Brown Sugar Frosted Mini Wheats, I noticed they seemed crunchier than usual. Then I realized that it wasn't the Mini Wheats that were crunching. It was part of my tooth.

I've been knitting a lot (GASP) but not really finishing anything (DOUBLE GASP!) 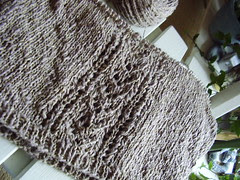 A tank top from the Coton-Silk I got from The Yarn Lady. I added a lace column to the center front and back of this from Berroco. 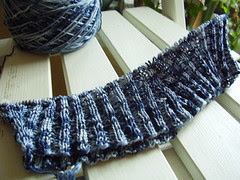 I did some stash cleaning on the weekend and came across this Millefili Fine that I got from Elann last year. I'm using this pattern from Drops/Garnstudio. 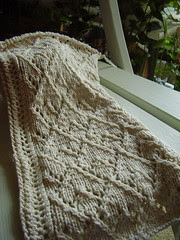 Lace cardigan front from Lana Grossa. I'm using cotton yarn recycled from a thrift store sweater. I'm hoping this will be a good solution for the hot/cold/hot/cold of summer in an overly air conditioned office...

I need to go take advantage of the evening with no hockey knit. I will get going again on the lace panel ribby cardi as soon as the needles I need for it are free (lace cardigan drew me in and took up the needles I needed).
Posted by Lori at 8:20 PM 3 comments: